As of today a brand new app, Second Canvas Mauritshuis, renders Vermeers Girl with the Pearl Earring and ‘The Garden of Eden’ by Brueghel and Bosch to zoom in on the brushstrokes of the paintings in Gigapixel.

‘Second Canvas Mauritshuis’ takes users on a voyage of digital discovery through a selection of the museum's masterpieces and introduces the artworks in an interactive way. It harnesses high resolution technology to zoom in on the brushstrokes, thereby revealing a level of detail in famous paintings that are otherwise invisible. It features an audio tour, which directs the eye to important aspects of the work, and can also be used to share the details directly via social media. Next to the Girl with the Pearl Earring by Vermeer and ‘The Garden of Eden’ by Brueghel and Bosch, the app presents eight other works of the Mauritshuis collection by Rembrandt, Rubens, Brueghel, Avercamp, Steen and others in high-resolution.

The ‘Second Canvas Mauritshuis’ app is downloadable from the App store and Google Play at a cost of €1.99. It is available in English and Dutch, for iPad, iPhone, Android and AppleTV. 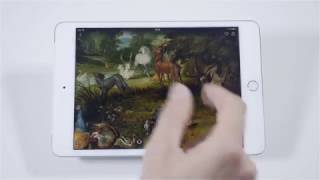