After years of painstaking and extensive restoration of the residence of Pieter Teyler (1702- 1778) – the birthplace of Teylers Museum, the museum’s director Marjan Scharloo and the architect Liesbeth van Apeldoorn of TPAHG Architects performed the symbolic opening of the monumental front door on Damstraat. This marked the official transfer of the building by the restoration partners to Teylers Museum in March 2021. The museum will continue to work on the interior of this unique historic building – the home of the founding father of the Netherlands’ oldest museum. The aim is to be true to Pieter Teyler's Enlightenment ideals and to show the continuing relevance of these ideals to our own times. The Pieter Teyler House will open to the public in November 2021, as a new wing to the museum.

Pieter Teyler was a wealthy Haarlem resident who left his fortune and house to a foundation set up with the express purpose of improving the lives of all. One of the results of this bequest was Teylers Museum, which opened in 1784, consisting at that time only of the Oval Room. Through the long and impressive marble corridor of the Teyler residence, visitors entered the Oval Room and marvelled at the latest scientific inventions and contemporary artworks. The museum welcomed famous guests such as Napoleon and Tsar Alexander – and much later Albert Einstein. The house is intimately connected to the museum, in terms of both physical structure and essence. It is an essential link in the “Big Story” of Teylers Museum: the master plan involving the integration of the collections, building and history that has underpinned the staff’s work since 2017.

Some of the rooms in the building, which was last renovated in 1715, are among the best-preserved historic interiors from the 18th-century Netherlands. Authentic architectural elements that have often long since disappeared elsewhere have been preserved here. The house covers 1,115 square metres. The ground floor will be open to the public, while guided tours and group visits will also be possible on the first floor. Designated first-floor rooms will be available for workshops and meetings. The Pieter Teyler House will not be accessed through the old front door at Damstraat 21 but through the main entrance overlooking the Spaarne that was built to replace it in 1885.

Since 2013, the large complex, which consists of four linked houses, has been thoroughly restored and returned as far as possible to its original state. After an initial phase focused on repairing the foundations and structural improvements, work started in November 2019 on restoring the exterior of the protected building. Thanks to a generous grant from the Cultural Heritage Agency, the house could be made more sustainable than originally planned. For example, the roofs were insulated for the first time and windows fitted with specially designed insulation glass. In the course of restoring the historic interiors to their original state, pipes and installations such the climate control and fire protection systems were concealed. These modifications will help to create a pleasant and safe environment for the public. The original colours have also been restored. 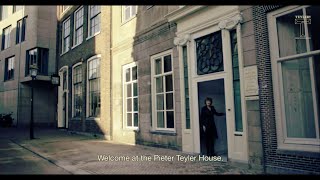 The Pieter Teyler House is one of the few places in the world where the Enlightenment is – quite literally – a tangible presence. The core idea of the Enlightenment, that everyone has the right to pursue happiness, was therefore the point of departure for the house’s design and function. Pieter Teyler believed that practical inventions and discoveries were the best ways of making the world into a better place. The restored house will create a link to the present. From November 2021 onwards, visitors will be invited to reflect on present-day views regarding how to make society better for everyone and how art and science can contribute to that goal.

Since 2019, the artist and photographer Johan Nieuwenhuize has been documenting the restoration process for the museum. The photographs will be published in a book with a unique design and specially-commissioned content, to be presented at the opening of the Pieter Teyler House.