Skip to content Skip to menu Skip to search
© Photo by D via Shutterstock
Category:Arnhem

A day out in Arnhem

Arnhem is an extremely diverse city, surrounded by unique nature reserves which invite walkers and cyclists. Arnhem also impresses with a unique offer of shopping and fashion. Children will also get their money's worth with the nearby Burgers' Zoo.

Things to see and do in Arnhem

The city of Arnhem is known to many Dutch people by the spectacular Burgers' Zoo. However, Arnhem also attracts visitors with plenty of other things to see, such as fascinating museums, fantastic shopping opportunities and excellent restaurants. Many shopping fans will be happy where fashion is concerned, as Arnhem is Holland's Number One fashion city and possesses its own 'fashion quarter'.

For years, Arnhem has been numbered among the top ten Dutch shopping cities. As well as international chain stores, the downtown area awaits you with a large number of quirky little shops. In the Arnhem fashion quarter, you'll find the boutiques of famous and aspiring Dutch designers. Many of them are graduates of the renowned Arnhem Fashion Academy. Thanks to the many well-known labels, such as gsus, Viktor & Rolf and Humanoid, Arnhem is associated with the theme of fashion in a fascinating way - and a real shopping paradise too! The small individual shops which have set up in historic houses (e.g. Kerkstraat and Pastoorstraat) in the '7 straatjes' (seven lanes) are also a highlight for shopping fans. Here you'll find shoes, lingerie, vintage, kitchen utensils, gift articles, and much more. Cozy and trendy cafes and bistros invite you to come and take a break.

Arnhem is the capital of the province of Gelderland, and is situated close to the Veluwe, the largest forest area in the Netherlands. Explore the De Hoge Veluwe National Park, perhaps on one of the white bicycles standing ready for you at the park entrances. And visit the Kröller-Müller Museum in the heart of the national park, which has achieved worldwide fame for its Van Gogh collection. Spacious water plains sprawl over the other side of Arnhem, inviting you for a walk and bicycle ride. A visit to the city park of Sonsbeek, which is over a hundred years old, is ideal for a breather during a wander around the city.

A stay in Arnhem can easily be combined with a visit to the modern Burgers' Zoo animal park , where you can experience the world's most diverse nature reserves. A more contemplative place is the Arnhem Open Air Museum, where Dutch traditions are still cared for. The 80 historic Dutch houses invite you to journey back into the past. Water is an important topic, not only in the Open Air Museum with its windmills, but also in the Dutch Water Museum, an interactive underground hands-on museum for young and old.

The Battle of Arnhem, which was fought on the banks of the Rhine river in September 1944, is the focus of the world-famous film ‘A bridge too far’. On location on the John Frost Bridge in Arnhem, you'll learn more about the fate of the civilians and soldiers in the 'Slag om Arnhem' information center. You'll also feel like you're right in the center of the Battle of Arnhem in the 'Hartenstein' Airborne Museum in nearby Oosterbeek. The war cemetery lies not far from the museum in Oosterbeek, with around 2,000 graves of fallen soldiers, mainly Britons. Back to Arnhem: You can find out more about the events of the Second World War in the Arnhem War Museum (Arnhems Oorlogsmuseum, Kemperbergerweg 780). There's plenty of things to see, from old tanks to propeller machines to munitions and uniforms. Tip: The local tourism board (VVV Arnhem) offers a city tour which brings you to all the main sights, including the John Frost Bridge.

How do you get to Arnhem?

Arnhem is very easy to reach, both by car and by train. You can even travel to Arnhem Station from Germany with the ICE. You can get to the downtown area from Arnhem Station on foot in only a few minutes. If you're traveling by car, you can choose from seven different parking garages in the center, or leave your car at the Gelredome park and ride.

Trip destinations in the surrounding area

Arnhem has an ideal location in the eastern Netherlands, near the German border and south of the wonderful Hoge Veluwe National Park. From Arnhem, you can quickly get to the surrounding cities, which are also worth visiting; Nijmegen is the oldest city in the Netherlands and has a rich and fascinating Roman past. The Hanseatic city of Deventer is also an attractive proposition, with a long history and the oldest park in Holland, Worpplantsoen. Enschede creates a perfect mixture of traditional and modern, and you'll find plenty of attractive shops and boutiques there. 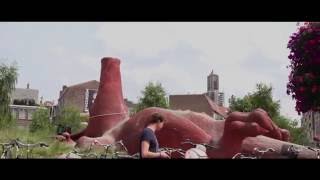 Watch this video: Made in [Arnhem]

De Stijl at the Kröller-Müller Museum

The Kröller-Müller Museum is De Stijl’s treasure trove. Discover how culture and nature merge on the Veluwe.