Skip to content Skip to menu Skip to search
© StudioVollaersZwart via Rotterdam Make It Happen
Category:Rotterdam

In 2021, the Netherlands could finally organize the Eurovision Song Contest and what a party it turned out to be! A succession of unique performances graced the stage at Ahoy Rotterdam with spectacular images, audio, light and special effects. The 65th edition of the Eurovision Song Contest was a special one as unprecedented online access allowed audiences around the world to follow every aspect of the event. Missed it or want to relive it? It’s easy online.

After waiting for two years, the moment has finally arrived: the 2021 Eurovision Song Contest kicked off in Rotterdam! It was well worth the wait, as it turned into the huge celebration we had all been waiting for. The Eurovision Song Contest is famous for its musical diversity showcased in extravagant performances. This year’s edition had everything from pop music and rock to electro folklore. Italy was the big winner so next year’s Song Contest will be held in Italy, but for now we’re happy to relive the event in Rotterdam.

Rotterdam hosted the 65th edition of the Eurovision Song Contest. The city chose the theme “Open Up” and invited the audience to open up to other people, music, creativity and change, focusing on bringing people together in Rotterdam. The Eurovision Song Contest was conceived after WWII to bring countries closer together through music and ever since, the event has always been open to new countries, concepts and innovations. A perfect fit for the vibrant city of Rotterdam!

Rotterdam is a bustling city with a population of over 630,000 people from 170 different nationalities. As such, every country participating in the 2021 Eurovision Song Contest was represented by the locals. With its unique urban vibe, Rotterdam is a cool and vibrant city. The spirit of daring and doing so characteristic of Rotterdam was clearly visible at and around the Song Contest.

You can get to know the city at Eurovision Village, the official ‘fan zone’ of the Eurovision Song Contest, with the aid of an interactive 3D map showing the city’s hotspots and cultural highlights. You’ll be able to watch it here all year, as well as interviews and shows recorded in Rotterdam during Eurovision week.

The Power of water

In the semifinal, the singer Davina Michelle and the actress Thekla Reuten performed in an extraordinary show inspired by water. Called “The Power of Water”, it revolves around the story of water. Water connects, is versatile and a vital part of the Netherlands. The unique act was recorded on the Delta Works and a unique water world was created at Rotterdam Ahoy by means of augmented reality. Want to know more about the history of water in the Netherlands? Read all about it in our Water Storyline. 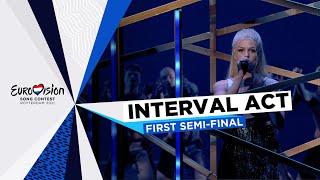 The Power of Water by Davina Michelle

The postcards shown before the artist performances are a small but important part of the Eurovision Song Contest. These postcards offer a small window into the artist’s personality and life and the host country gets an opportunity to show off some of its unique highlights. A unique concept was imagined this year: tiny houses in extraordinary locations. Tiny houses are growing ever more popular in the Netherlands and our homes have become a central feature in our lives with the COVID-19 pandemic, the living room in particular. The postcards show off the tiny houses in extraordinary locations in the Netherlands, decorated with the artists’ personal belongings. Curious about where the tiny houses were filmed? Check out the postcard playlist of the 2021 Eurovision Song Contest.

You can watch all of the performances of the 2021 Eurovision Song Contest on Eurovision’s YouTube channel, as well as the entire shows and movie clips from the LookLab in which NikkieTutorials interviewed the artists. Have fun watching!