Royal highlights of The Hague

Members of the Royal Family have been residing in The Hague virtually continuously for over four centuries now. Stadtholders, kings and queens have called The Hague home for hundreds of years, from William of Orange’s son in the 17th century to King Willem-Alexander today. We have collected the must-see royal highlights in The Hague and listed them for you.

Start your visit of royal The Hague with Noordeinde Palace. Once the residence of William of Orange’s widow and her children, today it is the office palace of our current King Willem-Alexander. Are you wondering whether the king is present? Watch the flag on top of the palace: the Royal Standard (flag) flies when the king is present.

Since the king still uses the palace when he works, it is not always accessible to the public. There are a few days in summer during which you can visit Noordeinde Palace and the Royal Stables.

It is still worth seeing the palace even when it is closed to visitors, however. The adjacent Palace Gardens are open year round and the perfect spot for a picnic with a view of the palace and Royal Stables.

The walk through The Hague’s center to the Binnenhof, the government center of Holland, takes less than 10 minutes. Prince Maurits, one of William of Orange’s sons, took up residence in the Binnenhof in 1585. It marks the beginning of the centuries old ties between The Hague and the Dutch Royal Family. Today, this is where politicians from the Upper and Lower Houses meet every day.

The best way to discover all there is to know about the  Binnenhof is on a guided tour. ProDemos organizes guided tours through the various buildings of the Binnenhof. Admire the Ridderzaal, the place where King Willem-Alexander reads the Speech from the Throne every year, and the Upper and Lower Houses where politicians debate and vote on new bills. The tours start at the ProDemos visitor center (Hofweg 1). You can also visit the House of Representatives on your own. To do so, you must register in advance via the website of the House of Representatives. 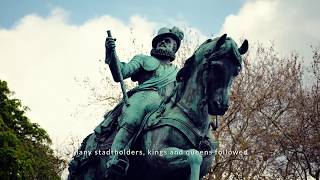 Watch this video: Royal highlights of The Hague

Across the square along the royal pond adjacent to the Binnenhof, on the stately Lange Voorhout, is Lange Voorhout Palace. This used to be the palace of Queen Emma, King Willem-Alexander’s great-great-grandmother. These days the palace is open to the public. This is where you will find Escher at the Palace, an interactive museum dedicated to the mind-boggling works of M.C. Escher. Admire the palace, discover his lithographs with optical illusions, and get your picture taken in ‘Escher’s room’.

Hidden in the Haagse Bos woods, just outside The Hague’s inner city, is Huis ten Bosch Palace. It was the residence of Princess Beatrix, King Willem-Alexander’s mother, until 2014. In future, the king will move into the palace with the queen and their children.

Escape the bustle of The Hague’s inner city and go for a walk or bike ride through the beautiful Haagse Bos. Huis ten Bosch Palace is not open to the public but you can see the majestic palace in its wooded surroundings on a bike ride or walk.

Want to see more beautiful palaces and royal monuments? Holland has many more cities with a royal touch. Visit Leeuwarden, the royal city of the Frisian Nassaus or the beautiful gardens of Het Loo Palace in Apeldoorn. Discover where William of Orange, our ‘Father of the Nation’, is buried in Delft, and stroll through the centuries old Begijnhof in Breda. Discover more royal cities.