Despite Holland’s attempts to remain neutral as WWII took hold in Europe, German forces invaded the country on 10 May 1940. Soon after, Holland was under German control. This began five years of occupation, during which life only got worse for the Dutch people. As well as being repressed, forced from their homes, starved, and forced to work in factories by their occupiers, almost three-quarters of the Netherlands’ Jewish population had been deported to concentration and extermination camps by the time the war ended. Learn more about the occupation and persecution of the Dutch during this time and discover the places, monuments and museums that you can still visit today to relive this dark period in Dutch history.

The German occupation of the Netherlands began after five days of fighting in May 1940. Bombers of the Luftwaffe had dropped their deadly payloads on Rotterdam during the Rotterdam Blitz, killing almost 1,000 of the city’s civilians and destroying tens of thousands of homes. The day after, the Dutch high command, knowing they were running low on supplies and ammunition, officially surrendered to the Germans.

The repression of the Dutch people begins in Holland

At the start of the German occupation of the Netherlands the centre of Rotterdam was in ashes, the Government and Royal family had fled, and anti-Jewish measures were implemented. After the Axis powers invaded the Soviet Union in June 1941 and were defeated in Moscow and Stalingrad things only got worse as Germany demanded bigger contributions from the Dutch people. In Holland, this meant that production became focused almost exclusively on supporting the war effort. The repression of the Dutch people increased, especially against the Jewish population.

The Holocaust in Holland

The persecution of Holland’s Jewish population was both evil and calculated. The discrimination and persecution of the Jews started immediately after the invasion. Jewish people had been forbidden from visiting public places and fired from government positions, and in 1941 the Nazis started deporting Dutch Jews to the Mauthausen-Gusen concentration camp.

On 22 and 23 February 1941 German forces raided the Jewish Quarter in Amsterdam, arresting and deporting more than 400 Jewish men. The Dutch people’s reaction was unique among Nazi-occupied Europe: they organized the February Strike, a two-day general strike which started on 25 February 1941. Unfortunately, it accomplished little, and by 1942 Jews were being forced to openly wear Star of David badges on their clothing and being deported to concentration camps in greater numbers. That same year the Germans established a transit camp at Westerbork in the Dutch province of Drenthe. Concentration camps were also built in Vught and Amersfoort. Today you can visit a museum and memorial at Camp Vught, where an audio tour lets you relive the stories of the people that were imprisoned there. Only around 38,000 of the 140,000 Jews that lived in Holland in 1941 survived by the time the war ended in 1945.

The atrocities committed during this period were barbaric, and perhaps one of the most shocking examples of this was the forced eviction of the Jewish psychiatric institution Het Apeldoornse Bosch when hundreds of disabled and mentally ill Jews were transported to be killed at Auschwitz-Birkenau. Visit Het Herinneringscentrum Apeldoornsche Bosch, now known as Zorginstelling 's Heeren Loo, to find out more about the institute and the history of the people that were cared for there.

Forced labour and the Atlantic Wall

One of the biggest impacts on the Dutch people during the occupation was caused by the German ‘Arbeitseinsatz’, which forced every man aged between 18 and 45 to work in German factories. As part of this program, approximately 500,000 Dutchmen were transported by force to Germany. Life in the factories was hard, and dangerous too, as the buildings were regularly bombed by the Allies. Those that refused to go were forced into hiding.

By 1943, tensions between the Dutch people and the occupying German forces were rising. This enmity was only exacerbated by the construction of the Atlantic Wall, a gigantic coastal defence line that the Nazi’s built from southwestern France to Denmark and Norway. In Holland, the wall was built through large stretches of The Hague and Scheveningen, with some Dutch people being forced to work on its construction. In total, tens of thousands of homes were evacuated, and many more people had to leave their homes to accommodate for its erection. You can find out more about the story behind the Atlantic Wall by visiting the Wadden region in the north of Holland. 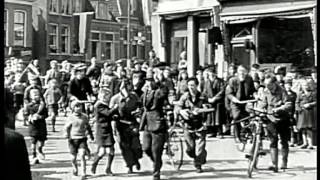 The Dutch Resistance to German control

Of course, some Dutch citizens couldn’t bear to see what was happening to their country and people and resisted the occupation. This resistance’s counterintelligence, domestic sabotage and communications networks helped to provide key support to Allied forces throughout the liberation of Holland. It was mainly made up of small-scale independent cells that also took part in a range of disruptive activities during the occupation, including forging ration cards and counterfeiting money, collecting intelligence, publishing underground newspapers and sabotaging phone lines and railways. Members of the resistance, if discovered, were immediately sentenced to death.

In Scheveningen, you can still visit the Oranjehotel, a detention house where members of the resistance were imprisoned and interrogated. Some 250 prisoners incarcerated at the facility were later sentenced to death and executed on the nearby Waalsdorpervlakte. The Germans also carried out vicious reprisals when attacked by members of the resistance. In the village of Putten 602 men – almost the entire male population – were arrested and deported to concentration camps as a reprisal for an attack on a vehicle carrying personnel from the Wehrmacht. And in the hamlet of Woeste Hoeve 116 men were rounded up and executed on the spot after resistance fighters shot the Nazi Chief of Police, SS General Hanns Rauter. Another 147 Gestapo prisoners were executed at several other locations. This was the largest mass execution in the Netherlands during the Second World War.

Another way to support the resistance was by hiding and sheltering refugees and enemies of the Nazi regime. The people that did this were known as onderduikers ('people in hiding' or literally 'under-divers' in English). The family of Anne Frank was just one of the groups hidden in this way. Today you can visit ‘The Secret Village’ in the dense forests near Vierhouten, where about 80 people hid for more than a year. Another refuge was Nieuwlande in the province of Drenthe, one of only two villages in the world that collectively received Israel’s Righteous Among the Nations award for saving Jewish people during the war.

Paying tribute to the victims of war

By 5 May 1945 Holland was free once more, but the country had paid a terrible cost. Huge swathes of countryside, villages, towns and cities had been destroyed. The total tally of dead was almost impossible to count. Today you can visit memorials and cemeteries honouring those that lost their lives during the conflict. These include the Field of Honor (Ereveld) in Loenen, where more than 3,900 war victims are buried, including civilians, resistance members and political prisoners. The military Grebbeberg Field of Honor near Rhenen is the last resting place of Dutch soldiers who died during May 1940. Ysselsteyn, in the province of Limburg, is the only German War Cemetery in Holland. Almost 32,000 fallen soldiers are buried here on 17 hectares of land. You can also visit war cemeteries in several places in Holland that represent the last resting place of American, Canadian, British, Polish, French and German soldiers and civilians who fell during WWII. The graves of soldiers who died during WWII can also be found at www.liberationroute.com.

From bunkers near The Hague to the Kazemattenmuseum in the Wadden Region, you can still see what remains of the Atlantikwall.

During the war, over 25,000 people were held captive at the Oranjehotel. At least 250 of them were executed on the Waalsdorpervlakte. The horrendous events are commemorated in both places.

Kamp Westerbork, a transit camp for the concentration and extermination camps, keeps the memory of hundreds of thousands of Dutch Jews, Sinti and Roma people who were murdered in WWII alive.

Experience a dark page in the history of WWII in Holland at National Monument Kamp Vught. More than 32,000 people were incarcerated at Kamp Vught in the course of the war.