The British played a key role in the liberation of the Netherlands from September 1944 to April 1945, starting with their involvement in Operation Market Garden. British forces went on to help liberate Holland in almost all parts of the country, with thousands of soldiers giving their lives to free it from the clutches of Nazi control. Follow their Liberation Route.

On Sunday, 17 September 1944, thousands of aircraft take off and fill the skies above England, heading for Holland. Including Stirlings, Liberators and more, the fleet is an awe-inspiring sight which foreshadows tragedy and destruction. Soon after, an army of airborne troops are dropped behind German lines, and ground troops invade the Dutch province of North Brabant from Belgium. Operation Market Garden, intended to help the Allies break through to Germany, has begun. The British are coming to help liberate the Netherlands. 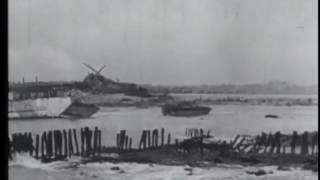 Operation Market Garden, which took place in Gelderland and North Brabant, was Britain’s first involvement in fighting the Nazis in Holland. The British 1st Airborne Division, ‘The Red Devils’ are dropped into the countryside around Arnhem and British ground troops advanced through North-Brabant and Gelderland. Other airborne troops also landed in other locations, including near Son and the Ginkelse Heide near Ede. On 18 September, American paratroopers liberated the Dutch city of Eindhoven, helping to ensure British ground forces could advance further north. To this day, the city holds an annual celebration to commemorate its freedom.

Allied forces got into trouble in the days after the operation was launched. The ground forces had to drive north over a narrow two-lane road. Under constant fire by German soldiers, they coined the route ‘Hell’s Highway'. On 20 September 1944, despite heavy German resistance, the Allies managed to capture the bridges across the Waal in Nijmegen. This success came at a high price - countless soldiers lost their lives during the heroic Waal crossing.

The 1st Airborne Division was pushed back to Oosterbeek, and John Frost’s 2nd Parachute Battalion was surrounded in Arnhem. Days later they surrendered. German tanks flowed over the Rhine Bridge into the Betuwe. By Saturday, 23 September, the soldiers fighting there were overwhelmed, and on Monday around 2,400 soldiers were evacuated from Oosterbeek to liberated areas south of the Rhine. Market Garden had failed.

The bridge that the Allied forces couldn’t capture – now called the John Frost Bridge, at that time ‘a bridge too far’ – still stands today. You can relive the tragic events of September 1944 and Operation Market Garden at the Airborne at the Bridge visitor center, a branch of the Airborne Museum Hartenstein in Oosterbeek. Another fitting tribute to the sacrifice of the soldiers who fought in the battle is the annual Bridge to Liberation Experience, a touching commemorative event held on the bridge which features film, dance, music and more. See more about visiting war cemeteries in Holland.

The Battle of Overloon and the liberation of Brabant

As Operation Market Garden failed, the Allies were already preparing for a new push towards Germany. To do this they had to secure the area west of the Maas river. One battle which helped achieve this was the Battle of Overloon. After US troops began the battle at the end of September 1944, a 90,000 strong British force stormed across muddy fields, taking Overloon on the evening of 12 October. Five days later the Germans gave up the city of Venray. More than 3,100 British, German, American and Dutch citizens were dead; the villages and surrounding area almost completely destroyed. The battle was over.

Today, you can visit the graves of the British soldiers who lost their lives in the fighting at the Commonwealth War Cemetery Overloon, and explore this tragic part of history further at Overloon’s War Museum, the largest museum of its kind in Holland.

Because the Germans in central and western Brabant posed a threat to the supply lines to and from Antwerp, in mid-October British and Canadian troops launched Operation Pheasant to push the Germans over the Maas. During the same period, British forces also fought in the Battle of the Scheldt in Zeeland, a three-week battle to gain access to the harbors of Antwerp.

In early November, after Zeeland and Brabant had been liberated, the divisions that fought there were redeployed in eastern Brabant and northern Limburg. On 14 November, Operation Nutcracker, the last offensive to free north Limburg began. Northern Limburg was flooded with allied troops, and by 26 November the Germans were pushed back to the Maas. By 3 December 1944, the frontline finally connected to the Maas. Most of the south of the Netherlands was free.

In the winter of 1944, Allied units in the operational area had come to a standstill in many places around Nijmegen. There were often static battles until Operation Veritable, also known as the Battle of the Reichswald, started. It proved to be a decisive turning point towards the end of the Second World War. The opening play in the Rhineland Offensive, a huge operation to reclaim the area west of the River Rhine and eventually cross it, it pulled together vast numbers of British, Canadian and American soldiers to push the Axis powers back into Germany. Find out more about it at the Freedom Museum in Groesbeek.

The eventual success of Veritable, after setbacks caused by flooding and the ferocity of the German defense line, meant that British forces were able to carry out a mission in March 1945 to liberate parts of the eastern Netherlands, reaching Enschede and Hengelo in early April.

One place where you can trace the liberation of this part of the Netherlands, and the story of WWII from beginning to end, is at the Memory Museum in the Dutch city of Nijverdal. On 16 April, Arnhem was liberated by the British. This was an important day for British troops who had lost friends in the city during the failed Market Garden operation. Around the same time, the British Special Air Service (SAS) supported Canadian troops to liberate the north of Holland.

By 4 May, the battle in the Netherlands is over. A day later, Queen Wilhelmina and Prince Bernhard gave speeches on the radio announcing the liberation.

On 7 May, the British began a triumphal march through the Randstad area – including Rotterdam, Amsterdam, The Hague, Utrecht and surroundings – witnessing parties in every place that they marched through. Now tulips protruded from gun barrels; flags were waved triumphantly through the air and people hugged whoever was standing close to them. The British headed home; the Dutch started to rebuild. Their country was free once more.

Experience a dark page in the history of WWII in Holland at National Monument Kamp Vught. More than 32,000 people were incarcerated at Kamp Vught in the course of the war.

1,763 British and Polish soldiers who died during Operation Market Garden were laid to rest at the Military Cemetery in Oosterbeek.

The war museum takes you on a trip through the history of the occupation, resistance and persecution during WWII and highlights the role of Overloon in Operation Market Garden. Cross the unique bicycle bridge, literally cycling through the museum on your way to the nearby cemeteries.

Participate in the battle with the Airborne Experience and become immersed in the Battle of Arnhem and Operation Market Garden with the aid of personal documents and authentic objects at Airborne Museum ‘Hartenstein’.