The Allied Forces halted their advance after liberating Brussels in early September 1944. This was the crucial moment at which the British Field Marshal Bernard Montgomery presented his bold Operation Market Garden plan to the Supreme Allied Commander, the American General Dwight D. Eisenhower. If Allied Forces could capture a number of bridges across the major Dutch rivers, part of their forces could circumvent the unassailable Siegfried defensive line and breach the heart of the German war machine: the Ruhr region. Sadly, Operation Market Garden proved to be ‘a bridge too far’.
Follow in the footsteps of the 101st Airborne Division, 82nd Airborne Division, 1st British Airborne Division, and the Polish First Independent Parachute Brigade during their brave journey through Holland and see with your own eyes the places that played a pivotal role in one of WWII’s most daring operations.

Operation Market Garden started on 17 September 1944. The two-pronged plan consisted of Operation Market, the airborne assault, and Operation Garden, the ground attack. The ground forces of the British XXX Corps had just three days to advance all the way from the Belgian border up to the city of Arnhem. In order for this to succeed, the bridges along the road would have to be captured by the American 101st and 82nd Airborne Divisions, and the British 1st Airborne Division. Montgomery hoped that the success of the operation would mean an end to the war by Christmas 1944. Despite being one of the biggest airborne operations in history, Operation Market Garden was only partly successful. Nijmegen and large parts of North Brabant were liberated after intense fighting, but Allied Forces were unfortunately driven back after initially capturing Arnhem. The northern parts of Holland had to wait until the spring of 1945 before finally being liberated.

The start of Operation Market Garden

On 17 September 1944, thousands of paratroopers and military equipment dropped from the sky. The airborne forces landed near Son and the Ginkelse Heide near Ede, among other locations. Operation Market Garden had begun. There is now a museum in Best, one of the locations where the paratroopers landed. Museum Bevrijdende Vleugels is a beautiful place that brings history to life with vehicles, machines and aircraft used in the operation, and more.

The Allied Forces advanced slowly. The ground forces had to drive north over a narrow two-lane road. Under constant fire by German soldiers, they called the route ‘Hell’s Highway'. On 20 September 1944, despite heavy German resistance, the Allies managed to capture the bridges across the Waal in Nijmegen. This success came at a high price with countless soldiers paying with their lives during the heroic Waal crossing.

Veterans still walk the ‘Sunset March’ every day in honor of the Allied soldiers. When the first couple of street lights on ‘De Oversteek’ city bridge light up, veterans walk across the bridge keeping time with the lights. The WWII information center overlooking the bridge opened in Nijmegen in 2019. The Freedom Museum near Groesbeek is also a must-see when visiting Nijmegen. This is where the 82nd Airborne Division started its move on Nijmegen in September 1944, and this area also witnessed the launch of Operation Veritable just a few months later in February. The museum brings all this past to life using the most advanced technology. 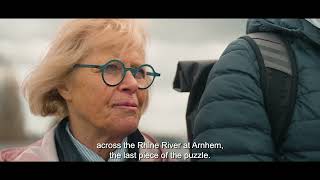 The ‘bridge too far’: Arnhem

Operation Market Garden was terminated on 25 September 1944. Even the assistance of the Polish First Independent Parachute Brigade proved futile. Sadly, the Allied Forces did not manage to capture the last bridge near Arnhem. Arnhem quite literally proved to be ‘a bridge to far’. More than 1,750 Allied soldiers who were killed during Operation Market Garden lie buried at the Airborne Cemetery in Oosterbeek. They are honored every year on the first Sunday after 17 September.

The ‘bridge too far’ still stands today. It is now called the John Frost Bridge and is one of the most iconic audio stations on the Liberation Route. Listen to the hosts and hostesses at the Airborne at the Bridge visitor center, a branch of the Airborne Museum Hartenstein in Oosterbeek, as they recount the tragic events of September 1944. This annual Bridge to Liberation Experience is a spectacular multimedia commemorative event held on the bridge every year. The nearby ‘De Polen van Driel’ information center in Driel reminds us of the vital part that General Stainslaw Sosabowski and his Polish paratroopers played in Operation Market Garden.

Bevrijdende Vleugels tells the terrible story of the liberation of southern Netherlands. The museum is situated in the area in which Allied Forces were dropped for Operation Market Garden on 17 September 1944.

The war museum takes you on a trip through the history of the occupation, resistance and persecution during WWII and highlights the role of Overloon in Operation Market Garden. Cross the unique bicycle bridge, literally cycling through the museum on your way to the nearby cemeteries.

At Airborne Museum Hartenstein, you will experience the Battle for Arnhem and Operation Market Garden with the aid of authentic objects, movies and personal documents. Take part in the battle in the 'Airborne Experience'.

Airborne at the Bridge

Discover the intense battle at the Rhine Bridge in September 1944. With a phenomenal view of the world famous John Frost Bridge (‘a bridge too far’), Airborne at the Bridge tells the personal stories of a British, German and Dutch soldier during the Battle of Arnhem.