In the winter of 1944, Allied units in the operational area had come to a standstill in many places around Nijmegen. There were often static battles until Operation Veritable, also known as the Battle of the Reichswald, started. It proved to be a decisive turning point towards the end of the Second World War. The opening play in the Rhineland Offensive, a huge operation to reclaim the area west of the River Rhine and eventually cross it, it pulled together vast numbers of British, Canadian and American soldiers to push the Axis powers back into Germany.

Planned by Field Marshal Montgomery, the Rhineland Offensive comprised several large-scale offensives that would lay waste to the Germans’ line of defense in Western Europe. Operation Veritable was a key part of this, with its renowned pincer movement intended to clear the German forces from the area between the Rivers Meuse and Rhine – a front just 12km wide. Having assembled a force of more than 500,000 soldiers around Groesbeek and Nijmegen in the east of the Netherlands – including the First Canadian Army led by General Crerar and Britain’s XXX Corps commanded by Lieutenant General Horrocks – Operation Veritable finally launched on 8 February 1945. To encircle the Germans, the British and Canadian forces would draw down from the north, while their American allies would close the trap from the south.

Few things play out smoothly in times of war. The pincer movement was put on hold after the Germans blew up the dam on the River Roer, causing substantial flooding which prevented Simpson’s 9th United States Army from making its move. What’s more, the British and Canadian battalions found themselves up against both the Germans and the weather. A cruel-fated temperature rise caused the frozen ground to thaw, transforming it into an impossible quagmire for the moving soldiers and vehicles. The Allies had a vast numerical advantage, with the British and Canadian regiments taking up position across the frontline. But the Germans used the conditions and terrain to guard the dense Reichswald forest, transformed into a vicious death trap thanks to its trenches, mortar pits, barbed wire and anti-tank ditches.

The Battle of the Reichswald was a truly bloody affair

Before the battle began in earnest, a huge Allied artillery barrage – the heaviest ever seen on the Western front during the Second World War – battered the enemy positions in preparation for the main attack. This was backed by air attacks, preventing the Germans from deploying reinforcements. But even as the signal was given for the assault forces to begin creeping towards the dazed German soldiers, it proved an arduous task and they quickly fell behind schedule. In some areas, men were left wading through freezing water up to their waists; the devastating explosions from hidden mines damaging tanks and vehicles, blocking the few usable paths; and as the rain continued to fall for days, the ground, churned up by shelling and heavy vehicles, turned into a thick porridge.

Throughout all this, the fighting was as fierce as at any point in the war. Surviving soldiers would go on to describe the Reichswald forest as a slaughterhouse, trees and buildings destroyed and recall brutal acts of violence and merciless man-on-man combat. Afterwards, Dwight Eisenhower described Operation Veritable as "One of the fiercest and most violent campaigns of the war, a bitter struggle for endurance between the Allies and the Germans."

A key moment in the liberation of Holland

Yet, the British and Canadian soldiers pushed on; the infantries still supported by heavy tanks and artillery. Some two weeks after it had begun, the British took up the line on the eastern edge of the Reichswald, which they had expected to reach within just three or four days. And as the flooding finally began to recede, the Americans began their own push, with Operation Grenade completing the trap.

The crossing of the Rhine on 23 March 1945 proved to be the last set-piece battle between the Allies and Germans in Europe. The eventual success of Veritable and the Rhineland Offensive paved the way for the continued liberation of Holland’s cities and towns. With the Germans unable to defend the Rhineland area, the Allied commanders could confidently continue the liberation efforts in the rest of the country, and many of the surviving soldiers were sent north, west and south to help.

It came at a high cost, though. During Veritable, the Allies lost 23,000 men, the Germans 38,000 – many of whom are buried or commemorated within the Groesbeek Canadian War Cemetery and the Reichswald Forest War Cemetery just across the German border in Kleve. 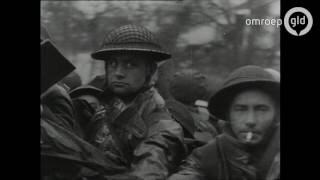 Visit the heart of Operation Veritable

The area at the heart of Operation Veritable is surprisingly small, making it easy to visit key locations as part of guided tours or self-guided exploration. What’s more, Nijmegen is an excellent base, offering easy access to the Reichswald as well as the other key sites of Operation Market Garden and the Battle of Arnhem. For a deeper understanding of the Rhineland Offensive, don’t miss the Freedom Museum. Set amongst a lush, green landscape, it’s a serene space in which to learn about the liberation of Holland through exhibitions, interactive exhibits, films and audio recordings and special events. Just a few kilometers from the German border, the Martinustoren Visitor’s Centre in Gennep is another moving liberation location: watch the short films, listen to a radio play and stop at audio hotspots marked by large boulders around the Liberation Route to discover more details of this tumultuous time in world history.

Spending the night in Nijmegen

Book your stay in the historic city of Nijmegen. For a slice of luxury on your trip, consider the Sanadome Nijmegen, a forested oasis on the edge of the city. Or if you want to overnight in the heart of the city, Hotel de Prince offers a wealth of comfort.

We recommend: Learn more about the liberation of Holland and the Allied forces that played key roles in bringing WWII to a close.

Commemorate the Canadian soldiers who gave their lives for our freedom during Operation Veritable or the Battle of the Reichswald.