The liberation of Holland

The liberation of Holland began in September 1944 and lasted until May 1945. It started after that fateful day on the beaches of Normandy – 6 June 1944­ – when thousands of soldiers gave their lives so that the Allies could gain a foothold in France and Europe, and after Allied troops had fought to drive the German forces out of much of France and Belgium. They then crossed into the Netherlands and freed large parts of the country, eventually freeing the Dutch people from an occupation that had left them powerless and had seen more than two-thirds of the Jewish population sent to concentration camps.

Despite being neutral during WWII, at the order of Hitler, German forces invaded Holland on 10 May 1940. The Government and the Royal Family fled while the army fought back, despite being unprepared and too poorly equipped to overcome Germany’s well-trained forces. After a vicious assault that included the bombing of civilian targets in Rotterdam, the Dutch high command surrendered the Netherlands to the invading German forces, prioritising the protection of innocent lives over the country’s freedom. It would be five years until the Dutch people would be free again.

After liberating Brussels in early September 1944, the Allied forces halted their advance. It was at this moment British Field Marshal Bernard Montgomery presented his bold plan for a new operation to the Supreme Allied Commander, the American General Dwight D. Eisenhower. His idea was to capture several bridges across the major Dutch rivers, circumventing the Axis powers’ Siegfried defensive line, and then quickly advance towards the heart of Germany. This was Operation Market Garden, and Montgomery believed its success could help end the war by Christmas.

Unfortunately, despite being one of the biggest airborne operations in history, Operation Market Garden was only partly successful. Learn how Nijmegen and large parts of North Brabant were liberated after intense fighting. However, the Allies were defeated in their attempt to secure the last bridge over the Rhine at the Battle of Arnhem, and the operation ultimately failed.

The Battle of the Scheldt and liberating southern Holland

The Allies had more success in other parts of Holland. Although it was one of the most gruelling campaigns of the entire war, the Battle of the Scheldt was successful in clearing out the occupying Germans from the Scheldt estuary to open the supply lines to the Allied front. Unfortunately, this victory, mainly fought by Canadian troops and Polish troops in the dykes and dams, flooded polders and heavily fortified villages and towns of Zeeland, came at a high cost. At the end of the two-week campaign, more than 6,000 Canadian soldiers had been killed, wounded or captured.

One key consequence of Operation Market Garden was that Allied troops also liberated a corridor of land which stretched from Belgium to Nijmegen via Eindhoven. This important strategic area was further secured by the Battle of Overloon. It began at the end of September 1944 and featured one of the fiercest battles witnessed in Holland during WWII. Around the same time, an Allied force attacked west and central Brabant, liberating the province in early November. Learn more about these battles and the soldiers who fought for liberation here at War Museum Overloon.

The liberation of Limburg and Brabant

Because the Germans in central and western Brabant posed a threat to the supply lines to and from the Port of Antwerp, in mid-October British and Canadian troops launched Operation Pheasant to push the Germans over the River Maas. On 14 November, Operation Nutcracker, the last offensive to free northern Limburg began. The region was flooded with Allied troops, and by 26 November 1944 the Germans had been pushed back to the Maas. By 3 December 1944, most of the south of Holland was free.

The monotony of war and Holland’s ‘Hunger Winter’

As winter set in, the fighting in Holland subsided and the monotony of war took over the terror, with soldiers on the front battling the intense cold and hunger as well as the German forces. Many soldiers battled sickness and fever, while some Dutch civilians were forced to live underground in cellars and shelters. The daily life of the 3.5 million Dutch people living in the still-occupied parts of Holland was dominated by a relentless and increasingly desperate search for fuel and food. Executions became common, ordered for even the smallest of crimes, including breaking curfew. As a result of this ‘Hunger Winter’, around 20,000 Dutch people died.

Operation Veritable and the beginning of the end

In February 1945, the front line that ran through the Netherlands was quiet and there was almost no fighting. This didn’t continue. Instead, in Nijmegen an influx of Canadian and British soldiers were arriving. In the daytime Americans dropped bombs on Germany, at night the British RAF took over. On 8 February 1945, Operation Veritable begins. The opening play in the Rhineland Offensive, a huge operation to reclaim the area west of the River Rhine and eventually cross it, it pulled together more than 300,000 British, Canadian and Polish soldiers to push the Axis powers back into Germany. The American forces’ Operation Grenade was planned to start simultaneously, bringing the Allies to the Rhine in a pincer movement, however, the Germans had flooded the River Roer, preventing the commencement of this operation. Learn more about Operation Veritable and how the British eventually fought their way to the eastern edge of the Reichswald forest. Some two weeks after it had begun, Veritable was a success.

The Freedom Museum near Groesbeek is one of the best ways to relive this period. The museum is located in the area where the American 82nd Airborne Division started its move on Nijmegen during Operation Market Garden and where Operation Veritable was launched just a few months later. It uses smells, interactive presentations, dioramas, models, original film and sound fragments to evoke life during this time.

The end of the liberation

The fighting on 23 March 1945 proved to be the last set-piece battle between the Allies and Germans in Europe. The victory allowed the Allies to move for the Rhine. The eventual success of Veritable and the Rhineland Offensive then paved the way for the continued liberation of Holland’s cities and towns. From Gendringen and Emmerich, Canadian troops re-entered Holland and headed north to help liberate the area up to the Wadden Sea. Three British divisions moved from the German town of Wesel to the Netherlands, quickly conquering village after village. On 16 April, British troops liberated Arnhem; by 5 May Holland was free again. 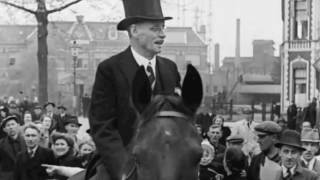 Liberation of the Netherlands - may 1945

Remembrance, Liberation Day and the creation of the United Nations

On 4 May each year, Holland stops to pay tribute to the fallen during Remembrance Day. A national ceremony takes place at Dam Square in Amsterdam, while other remembrance ceremonies take place in towns and cities around the country, as well as in Holland’s war cemeteries.

The next day, 5 May, is known as Liberation Day, or Freedom Day, and it is celebrated with festivals in Amsterdam and Holland’s 12 provincial capitals. It was also on this day that General Foulkes, commander of the 1st Canadian Army, summoned the German General Blaskowitz to Hotel de Wereld in the Dutch city of Wageningen to sign a surrender document. Wageningen now calls itself  ‘City of Liberation’ and celebrates Dutch freedom with a range of events on 4 and 5 May. You can find out more about these events at the Museum De Casteelse Poort.

As a response to the tragedies of WWII, major powers from all over the world came together to form the United Nations (UN). You can find out more about the creation and powers of the UN in The Hague, also known as the City of Peace and Justice.

4 and 5 May, remember and celebrate

On 4 May, the Dutch commemorate the victims of war. The entire nation celebrates its freedom on 5 May. Discover all of the activities.

On 5 May 1945, the Germans officially surrendered all German troops in Holland at Hotel De Wereld in Wageningen. One day earlier, the unconditional military surrender had occurred on the Lüneburger Heide. Discover the inextricable ties between Wageningen and the liberation of Holland.

The Hague, city of Peace and Justice

After WWII, The Hague evolved into the international city of Peace and Justice. Day after day, the International Court of Justice and Peace Palace work tirelessly to make our world a better place.