Delft and the Royal Family have been closely associated for hundreds of years. It is the city where ‘Father of the Nation’ William of Orange came to live after fleeing Breda in 1572 and where he was assassinated 12 years later. The relationship between Delft and the Royal Family also has a modern edge. We have listed the three main royal attractions in Delft for you. Join us on a walk through royal Delft!

Start your exploration of royal Delft at Museum Prinsenhof, the place that witnessed one of the most important events in Dutch history. A must see when you visit Delft. 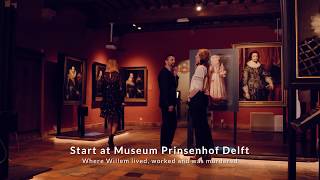 Today, Museum Prinsenhof is a wonderful museum that brings you face to face with history. See the holes left by the bullets that ended William of Orange’s life and are still embedded in the wall nearly 450 years later.
Sint Agathaplein 1, Delft

Around the corner from the Prinsenhof is the Oude Kerk (Old Church) whose leaning tower dominates Delft’s skyline. Don’t forget to take a picture of the leaning tower, the beautiful stained glass, and the graves of famous Dutchmen including Johannes Vermeer, Piet Hein, and Anthonie van Leeuwenhoek. The Oude Kerk has a royal past: in 2004, the late Prince Friso wed his Mabel here. The date? 24 April, the date of birth of William of Orange.
HH Geestkerkhof 25, Delft

In about five minutes, you can walk through the pleasant streets of Delft to the Nieuwe Kerk (New Church), where William of Orange is buried. Ever since that day, the Nieuwe Kerk is the location of the tomb monuments of members of the Royal Family. Admire the beautiful monumental grave of the ‘Father of the Nation'.

In addition to William of Orange’s impressive grave, there is also a permanent exhibition about the church’s extraordinary history, and you can climb the tower for the best view of Delft. Your ticket for the Oude Kerk also grants access to the Nieuwe Kerk.
Markt 80, Delft

Delft is not the only royal city in Holland. The Hague, the government city in which King Willem-Alexander holds offices in a palace, is just fifteen minutes away by train or car. Admire beautiful palaces and the Binnenhof, the centuries old center of power, in this city. Visit Leeuwarden, the royal city of the Frisian Nassaus or the beautiful palace gardens of Het Loo Palace in Apeldoorn. Discover more royal cities.

Experience a day in Delft, the city of the most famous member of the House of Orange-Nassau.